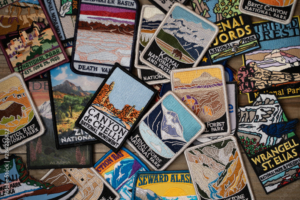 It’s no secret that whatever clothes someone wears say a lot about a person’s personality. People who like to wear bright colors are usually bubbly, while those who wear darker colors usually have a more relaxed demeanor. However, some people kick it up a notch by including various accessories on their clothes, such as custom patches.

There are many different types of custom patches one can get, which we’ll discuss in this article. Read on below to get started.

Woven patches are patches that are sewn onto fabric with a loom. Woven patches have a distinct look, and they’re a lot more durable than embroidered or sew-on patches.

These patches are a combination of different patches. For example, there might be a sew-on patch on top of an embroidered patch. This combination is prevalent in the military and luxury clothing brands.

Felt patches aren’t as standard as other patches, but they’re still a great choice. For example, felt patches can be glued onto items such as bags. Additionally, they can also be added to clothes without damaging the fabric.

Iron on patches are patches that are sewn onto clothes using an iron. While these patches are not as durable as sew-on patches, the patches are still a popular choice for those looking for a quick fix because you simply need to use a clothes iron.

PVC patches are a type of sewn-on patch that has a transparent background. These patches are commonly found on thicker clothing. The PVC patch can be used to make a patch that looks floating. The only downside to these patches is that they can easily be damaged, meaning extra care must be done.

What Should You Get?

Custom patches are a great way to show people what your interests are and to promote your business. In any case, the type of patch you get should be reflective of your personality and fashion.If you’re looking for custom patches for clothing, Artex Group has what you need! We offer a wide selection of patches that can help heighten your brand’s awareness, all for affordable prices. Call us today to get a quote!