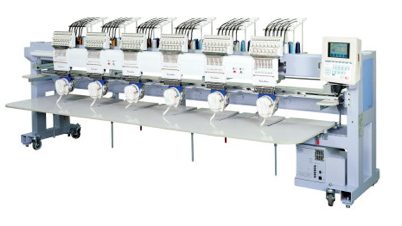 I was recently asked about the history of embroidered emblems or “patches” and how has the industry changed in the past 15 years or so.  It got me thinking about 1999, the year I began my career in designing and manufacturing embroidering patches.

Today, the majority of emblems are made on multi-head embroidery machines (I will talk about multi-head machines shortly).  This is a vast difference to when I first got into this industry as most companies were making patches on Schiffli Embroidery machines.  Schiffli machines were manufactured in Europe at the turn of the past century and have been the machine of choice up until the late 1990’s.  The machines are massive measuring over 18 meters in length and 4.5 meters in height.  Each machine had more than 1000 needles.  The space required to set up such machinery is extensive. Typically, the machines would hold 2 pieces of twill set vertically.  Twill is the material we stitch into.  The twill would measure approximately 13 meters in length and just over 1 meter in height.  Both pieces of twill could be embroidered at the same time so your output was fast and numerous.

The machines have incredible durability as many of the existing machines today are decades old.  I recall the company that introduced me to emblems had machines that were made in the 1940s.  With the advent of computerized systems, productivity and detail accuracy have improved over the years but the popularity of these machines as dropped significantly.  The biggest drawbacks are expense of owning and operating them, space required for set-up and lack of embroidery detail.  The lack of embroidery detail was not such an issue or should I say, not noticed as much until multi-head machines came on the scene.

Multi-head machines’ popularity took the industry by surprise as the machine’s ability to deliver highly detailed patches in timely, considerable quantities was quickly adopted.  The machines are made up of a series of separate sewing heads or stations.  Each station is responsible for the completion of one emblem.  The number of stations per machine varies from a few to over 30 or more.  Unlike the Schiffli machine, the twill is placed horizontally in various lengths ranging from 3 meters up to 15 or more, depending on the number of stations. 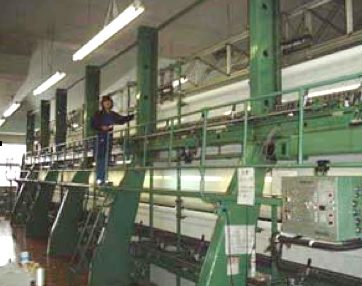 The greatest contribution these machines offer is the attention to embroidery detail.  When compared to Schiffli produced patches, the multi-head product looks much cleaner and clearer.  There really is no comparison once you compare them side-by-side.

At Artex, we use only multi-head machines so absolute clarity is the best it can be.  Not to segue into another topic but regarding clarity, I can’t overstate the importance of the quality of the digitizing file.  This file instructs the machine as to where to place the stitches.  The bottom line is the person or artist who creates this file will ultimately control the overall beauty and detail of the patch. Their ability or lack there of is the key component.  Okay, that is another topic so more to follow later.