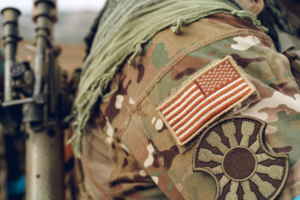 Clothing is one of the best ways people can express themselves. After all, many things can be said about a person based on how they dress. The military learned this early on and created unique uniforms for each branch of the service.

Military patches are precisely what they sound like: patches attached to the outfits of military personnel. These patches serve different purposes like indicating rank, identifying a particular military branch, or indicating awards won or attained by the wearer.

Not many people know how military patches started, so we’ll discuss their history in this article so, please read on.

The Start of Military Patches

Not long after, the United States also decided to practice this tradition during the American Civil War. Both factions of the war, the Union and Confederate soldiers, wore different patches that identified them along with their respective blue or gray.

Military Patches in World War I

While American troops used military patches during the Civil War, it wasn’t until

World War I that they became standard. Thanks to the Industrial Revolution, it was possible for military uniforms to be mass-produced. Furthermore, people could obtain embroidery machines that allowed them to put different symbols on their uniforms.

The US Army’s 81st Division made the first-ever tactical patch. The 81st were trained at Fort Jackson, and the leadership there adopted a patch that has an embroidered wildcat against an olive green background. Not long after, most divisions created their own unique patches, many of which are now collector’s items.

More patches were created during World War II, and they were more elaborate and had more detail than World War I-era patches. Some of the most significant factors in this change were the number of divisions and the different materials used.

During this era, in order to lift spirits and improve morale the military turned to the Walt Disney Company for help. The military commissioned Disney create  patches with everyone’s favorite Disney characters on them, such as Mickey Mouse, Minnie, Goofy, and more. However, the most popular of these patches featured Donald Duck, who himself was a war icon at the time since the company produced many propaganda films with him in the starring role.

Disney patches boosted morale not just because of the patches but also because the soldiers felt that their work was important enough to be recognized by Walt Disney.

During the Vietnam war, the bright style and novelty of World War II-era military patches mostly disappeared. It was only revived in the early ’90s when the 82nd Airborne Division made a few patches as souvenirs for their war veterans.

Today some of the more popular military patches are made for paratroopers in the United States. These patches feature the emblem of the airborne and the soldiers who earned their wings.

Military patches have also appealed to civilians who often collect them. The most common ones are jungle patches made from green cloth to represent the jungles where American soldiers fought.

Military patches have been and continue to be an important part of military tradition, and the interest of collectors has grown over time. They not only look nice on uniforms – many collector’s frame patches for display.

If you’re looking for custom-made patches, Artex Group has what you need! We specialize in printing different patches, such as embroidered, dye sublimation, and PVC. We can guarantee that you’ll get only the best quality of patches through cutting-edge technology, so reach out today to get a quote!